I came to Moscow to live many years ago, more than 17. I had no firm idea about how long I would stay but after about nine months and some difficult times I had to make a decision to stay or to leave. It was a cold January and very few people would venture out into -20 unless they had to or unless they were like me – curious. The city felt still and quiet – the stillness enhanced by the deep snow which muffled the sounds of the city. At that time the city was less congested and crowded and so there were areas of calm which you could seek out to escape the noise and traffic. I remember walking around one such oasis of calm, Gorky Park by the Moskva River and stopping to watch a small boat chugging up river, breaking the ice. Long after the boat had disappeared a few miles up further on, small waves would gently snap open and dislocate the ice on the surface of the water with a distinctive rhythmic crack like glass being cut and broken into pieces.

A few days later I took the metro to a place called Kolomenskoe, an old monastery estate in grounds which stretch down to he river. The white towered Church of the Ascension of the Lord was constructed in 1529-1532 by order of Tsar Vasily III to commemorate the birth of his son and heir, Ivan the Terrible. It sits on the crest of the high river bank which sweeps down some thirty metres or so to the river. Paths criss cross and spiral down and around the extensive bank from where there is an open vista of the city over to the left looking across the river. Directly in front, on the far side of the river is a water works or sewage works which is surounded by what seemed like flat marsh lands. The young Peter the Great, who lived here for much of his adolecent life, would organise war games with his friends using fireworks and mock up weapons, practising tactics and battle plans which he would later use for real to develop and forge a new Russia. 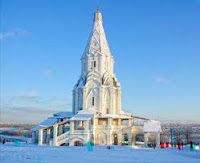 I found a path which went along the top of the bank away from the main territory of the estate through a wooded area past some old abandoned houses and a school. At the far end of the path, maybe a kilomtere away, I could see that the path opened out onto a highway. Cars could be seen cutting across the opening in the tree lined path. I decided not to walk to the end but decided to return at another time to see where the path connected to. This air of mystery is part of Moscow’s allure, you never know what you will discover around the next corner. I turned back to the main part of the estate realising it was getting late.

The winter sun had tinted the snow the colour of a blood orange. The question going around my head was what to do: to stay in Russia or return home and if I did stay in Moscow what would I do here. In a flash as I gazed across the snow covered slopes now almost red in the late setting sun the answer was clear. I would stay and it didn’t matter what I would do here, that question would settle itself. It was a sudden feeling of relief, a culmination of weeks of indecision. Moscow stretched out before my eyes literally and metaphorically, this would be my home – a strange feeling and what was even more strange was that it felt quite natural – no doubts – as if I had made the decision a long time before which obviously I had.

END_OF_DOCUMENT_TOKEN_TO_BE_REPLACED

Excellent news about the film “Meyerhold Theatre and the Russian Avant-garde”. The film has been selected as part of the “100 years of performance” in Moscow along with films byYoko Onoand other film makers, which is being held at the Garage in Moscow. The exhibition is a 100 year history of theatre using film and video installations.The Garage is a new venue for modern art in Moscow. It is a converted bus garage which was designed by the grat Russian avant-garde architect and artist Konstantin Melnikov.  END_OF_DOCUMENT_TOKEN_TO_BE_REPLACED